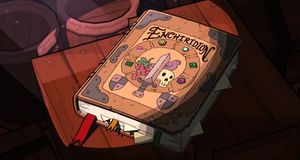 The Enchiridion, shown in one of the loading sequences of the game

Enchiridion translates into handbook or manual and is ancient book with guidelines for heroes. It was discovered by the Ice King, when he still was a human with the name of Simon Petrikov. The book was destroyed by Finn in the 26th Adventure Time Episode in Season 4, "The Lich".

In Adventure Time: Pirates of the Enchiridion[edit | edit source]

Although the book was destroyed, there are other Enchiridions and many universes. In the game story, somebody had exchanged the position of one of the crystals in Ice King's crown, which reversed his ice magic, which resulted in the melt down of the Ice Kingdom. It seems, as if somebody was trying to power up the Enchiridion.